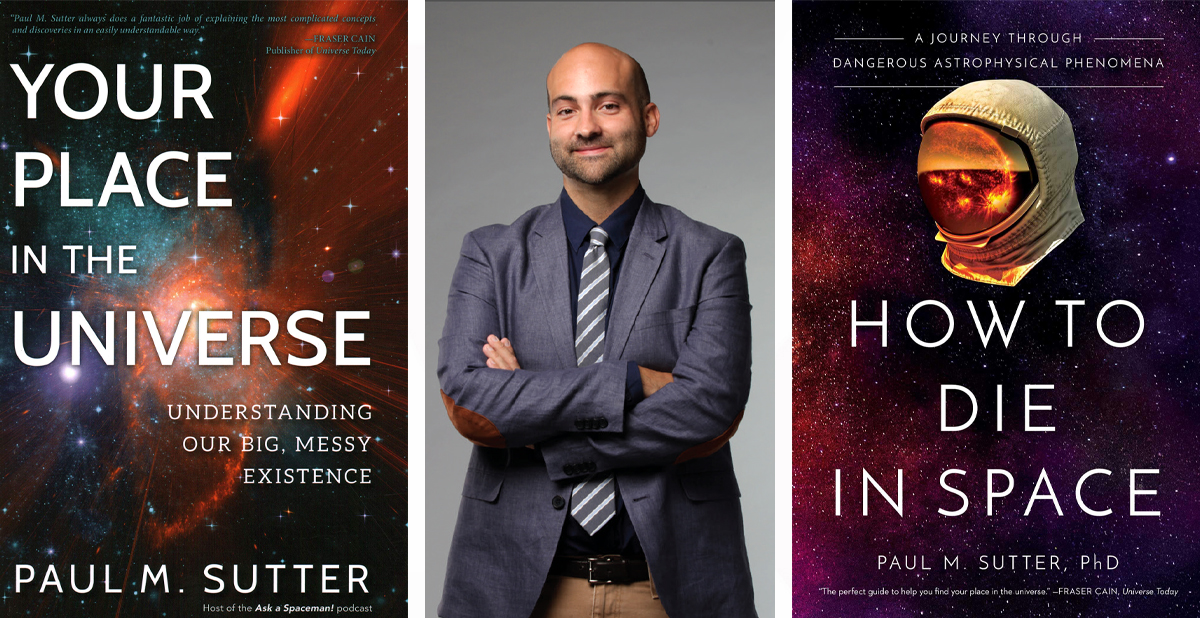 We met Paul M. Sutter, theoretical cosmologist, award-winning science communicator, author, speaker, host, and a globally recognized leader in the intersection of art and science. Sutter holds a research professorship at the Institute for Advanced Computational Science at Stony Brook University and a guest researcher position at the Flatiron Institute in New York City. Paul has authored two books, Your Place in the Universe and How to Die in Space, with his latest book, A Sickness in Science, coming in 2023. Paul hosts a variety of science shows across all platforms, including How the Universe Works on Science Channel, Space Out on Discovery, and Edge of Knowledge on Ars Technica. He also writes and hosts his own shows, including his hit Ask a Spaceman podcast, which is one of the top podcasts in the world.

The Universe makes us feel like a butterfly on Earth, since butterflies only live a few days, and are unable to see the “beginning” and “end” of the life of a human being. We live too little to see the beginning and end of the Universe, just like butterflies. Do you think that a path, born from the Big Bang and lasted hundreds of billions of years, can one day end and create the void? Or will it all start again with a new Big Bang?

All of the available evidence says that our universe will continue to expand, sending all the material in the universe infinitely far away from each other into a temperature approaching absolute zero. The big problem here is dark energy, which is the name we give to the accelerated expansion of the universe. As far as we can tell the expansion of the universe shows no signs of slowing down. So this is a pretty grim picture! But we really don’t understand dark energy, and it may transform itself in the distant future. It’s just a shame we probably won’t be to see for ourselves what will happen.

Why is it so important to study the “Cosmic voids”?

The cosmic voids are the vast expanses of almost nothing that dominate the volume of the universe. For decades cosmologist ignored them to focus on the rich structures, like galaxies and clusters. But it turns out that cosmic voids are the perfect place to study the evolution of the universe. Because they haven’t changed much in billions of years, they retain a memory of the early cosmos. So by looking into the cosmic voids we can open a time capsule into our distant past and learn about the primordial universe. It turns out that nothing can be very valuable indeed!

Remembering your book “Your Place in the Universe”, do you think that the various cosmic theories, such as Albert Einstein’s “Special Relativity” and “General Relativity”, can come together to allow us to travel in the Universe, and be able to connect with other worlds? Or do the laws of Physics force us to remain distant and alone in the Universe?

Well I love a good science fiction book or movie as much as anyone, I do not think that interstellar travel is going to be possible for a very very long time. Even if it is possible, it will be painfully slow, with journeys taking thousands of years to go to even the nearest star. Of course this is all based on our current understanding of physics, which can change at any moment, but for now I will content myself to know that I can look through a telescope and use that to reach the most distant corners of the universe.

In your books “Your place in the Universe” and “How to die in Space”, what were the topics that opened your mind the most, and that left you surprised by the greatness of nature?

One of the most fascinating aspects of our understanding of the universe is how universal physics really is. We have discovered common, universal laws that apply to every part of the cosmos without exception. This is amazing! We can perform experiments in the laboratory and use that to understand how distant stars and galaxies work. We can write down equation on the chalkboard that apply not just here on Earth but throughout the cosmos. This makes physics and incredibly powerful tool and a beautiful gift.

Taking up your book “How to die in Space”, we humans are used to going where “we cannot live”, such as 10,000 meters above sea level with airplanes, or to the International Space Station. Do you think humans are a perfect species to explore an inhospitable and dangerous universe? The laws of nature tell us that we must stay on our planet, but our curiosity is stronger. Is it right to follow the laws of nature or the instinct of the explorer, who tells us to go out and travel to give our human species a future?

By my very nature I am an explorer. I believe that science is a pursuit of curiosity, and that is a worthy goal in its own right. I do not think that humans will be stuck to the planet Earth for very long. Our own sense of adventure and sense of curiosity will drive us to spread throughout the solar system, if for no other reason then we are curious about it.

In addition to being a writer, you are also an excellent science communicator. What is your secret for bringing audiences of all ages, and from various school backgrounds, closer to complex subjects such as Ast rophysics, Cosmology and the study of the Universe?

I appreciate the compliment! Honestly, I’m just having fun. I love exploring the universe and explaining what we found to audiences of all kinds. I know that the people I speak to are just as curious as I am about the natural world, and in my work I try to cultivate that shared sense of adventure and exploration. And I’m humbled and grateful for every single person who comes along on that ride.