Garth Illingworth, leader of the early work on the James Webb, talks about oldest galaxies 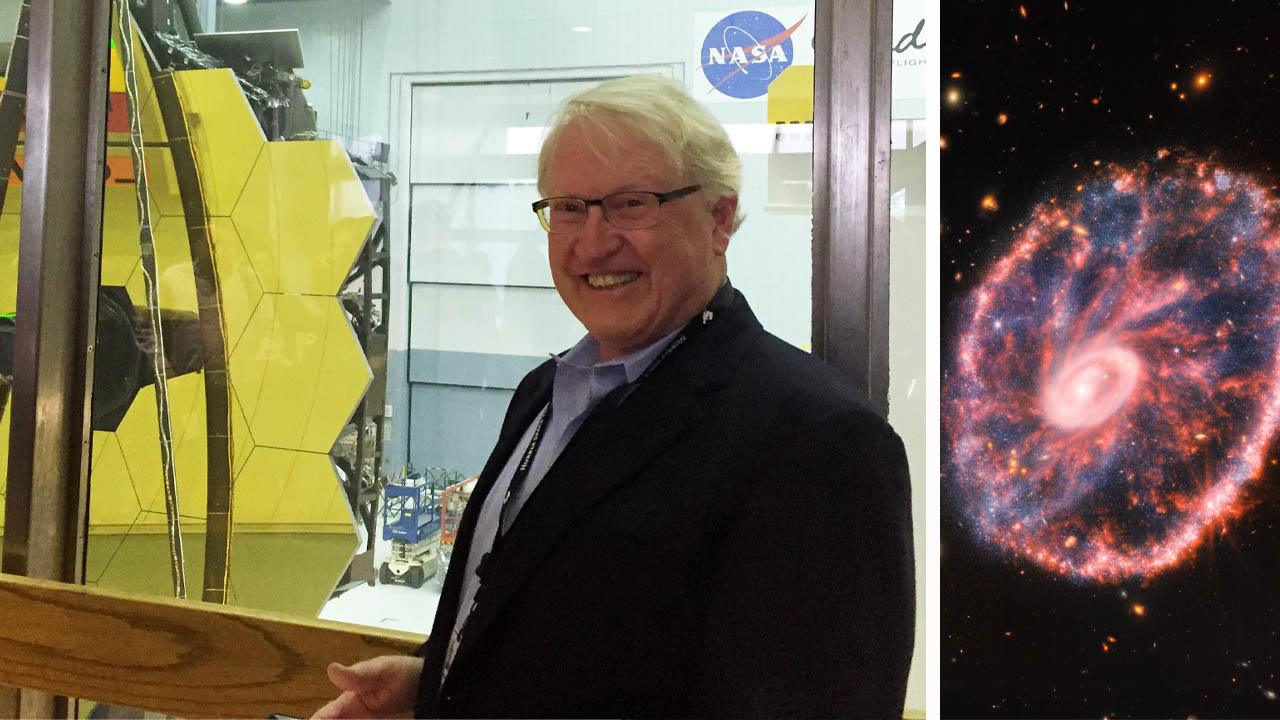 We met Garth D. Illingworth, Professor at the University of California, Santa Cruz. Garth was the leader of the early work in 1987-1992 on the Next Generation Space Telescope (NGST) that is now known as the James Webb Space Telescope (JWST). He organized the first science conference on NGST in 1989. He chaired the “UV-Optical in Space Panel” of the 1990 Decadal Survey that recommended a 6-m passively-cooled large space telescope, and continued work on the concept with NASA HQ and JPL support into the early 1990s. This work ultimately became the NGST recommended in the 2000 Decadal, and then renamed to JWST.

The James Webb Space Telescope of NASA, ESA and CSA, became to work in summer 2022 and it’s the biggest and the most powerful space telescope of the history: primary mirror consists of 18 hexagonal mirror segments made of gold-plated beryllium, which combined create a 6.5-meter-diameter (21 ft) mirror. It is deployed in a solar orbit near the Sun–Earth L2 Lagrange point, about 1.5 million kilometers (930,000 mi) from Earth.

During your career you have been lucky enough to study the “closest” galaxies and, subsequently, you have traveled back in time, observing the most distant galaxies in the Universe. How do galaxies change over time?

Galaxies are like children – they grow dramatically from birth to maturity. When galaxies first form 13 billion years, or more, ago, they are small, chaotic clumps of stars and hot gas. The ones we see in the Webb images are 20-100X smaller than the Milky Way today. The “dark ages”, when there are no stars, end as the dark matter and gas that has been collapsing reach a point where the first stars can form. The tiny, blue infant galaxies then grow by collecting infalling gas that crashes into the gas already in the galaxy, making new stars. They also grow by colliding with their neighbors, merging into one bigger galaxy, and making whole lots of bright new stars in that chaotic collision. And so on. After about 200-300 million years from the Big Bang the infant galaxies become bright enough for Webb to see.

If we compared the galaxies observed 350/400 million years after the Big Bang, with galaxies like ours, what differences would we find?

An image is below of what these galaxies look like back then – blue blobs (taken from some images from Hubble). Webb will reveal more detail, of course, but the chaotic blue character is what we expect of very young galaxies near the beginning of time. These little chaotic blue blobs are probably very much representative of galaxies at very early times. The Universe is 13.8 billion years old and we are already looking back 13.4 billion years – looking back through 97% of all time.

Galaxies today range from wonderful spiral galaxies like Andromeda (and like our own Milky Way) to huge amorphous “blobs” of stars called elliptical galaxies, but there are also many smaller galaxies that are chaotic too. But they differ in that they are usually dusty and show fewer forming stars. Galaxies today have lots of heavier elements. These heavier elements were very rare in galaxies in the early universe. So there was almost no dust.

Yes – I did play a leading role early on with the early concepts for JWST – we called the JWST Observatory the Next Generation Space Telescope in those days (or NGST for short). It was a small team that helped develop the concept and I was so impressed by the way in which it captured the imagination of so many amazing engineers, scientists, and managers/leaders, in such a short time. Yet it did take a lot of work since we were doing this before Hubble launched. We had to convince key NASA leaders to help us move the concept forward and we had to work to convince our colleagues that what we were proposing was actually good to do, being an important and unique step forward, and actually doable with future technology. To see the NGST concepts develop in the 1980s and 1990s was an incredible experience.

By observing the first galaxies born after the Big Bang, and the various galaxies closest to us, can we be able to understand the shape of the Universe? Can we find out more about dark matter and dark energy, also thanks to the power of James Webb?

The observations of giant clusters of galaxies like the one shown in the ERO images on July 12 (SMACS 0723) will certainly help us map out dark matter and tell us more about how it effects the objects we see. We will refine what it does, and even narrow down its properties, but ultimately, we need to actually detect some dark matter “particles” with experiments on the ground to fully understand what dark matter is.

It is highly likely that we will do LUVOIR. NASA is now calling it “Habitable Worlds Observatory”. We are currently in the very early phases of its development, mostly focused on the needed technologies. We hope that it can be developed, built, tested and flown in about 15-20 years. LUVOIR (or HWO) is a >6 m telescope that has as its primary goal looking at earth-like planets directly and revealing characteristics of their atmospheres through much more detailed imaging and spectra. The key goal is searching for any signatures of life. HWO will also be a “super-Hubble” able to do a lot of other science beyond what Hubble could do, since HWO has a larger mirror – much like Webb in size.

There is another space telescope under construction, WFIRST – now called Roman, that will launch later this decade. This is a Hubble-sized telescope (2.4 m mirror).

What fascinates me most about the Universe is time. It is strange to think that light can be eternal, because according to Albert Einstein’s Special Theory of Relativity, time stops if the speed is 300,000 km per second. Comparing our short life, with the age of galaxies, which can be billions of years, makes you think. How does the life of an astronomer change when he studies the time of the Universe?

Yes – there is much mystery, and beauty, in the concepts of time, of light travel, and of gravity, that is revealed by the Special and General Theories of Einstein. Human lifespans are really infinitesimal in the context of the age of the universe. Even in the context of the age of the Earth and the Sun the period in which homo sapiens has existed and ruled the planet is utterly infinitesimal, though certainly not inconsequential, given the changes and damage that we have wrought!

For me, the immensity and complexity of the universe leaves me in awe of what a few forces and constituents of the Universe (baryons, dark matter, dark energy) can herald when their mix evolves in an infinite Universe. And also that we, as mere short-lived specs on one planet, in one of billions of stars in one galaxy amongst the billions of galaxies in the cosmos, have come so far in describing and understanding the Universe that we fleetingly inhabit.