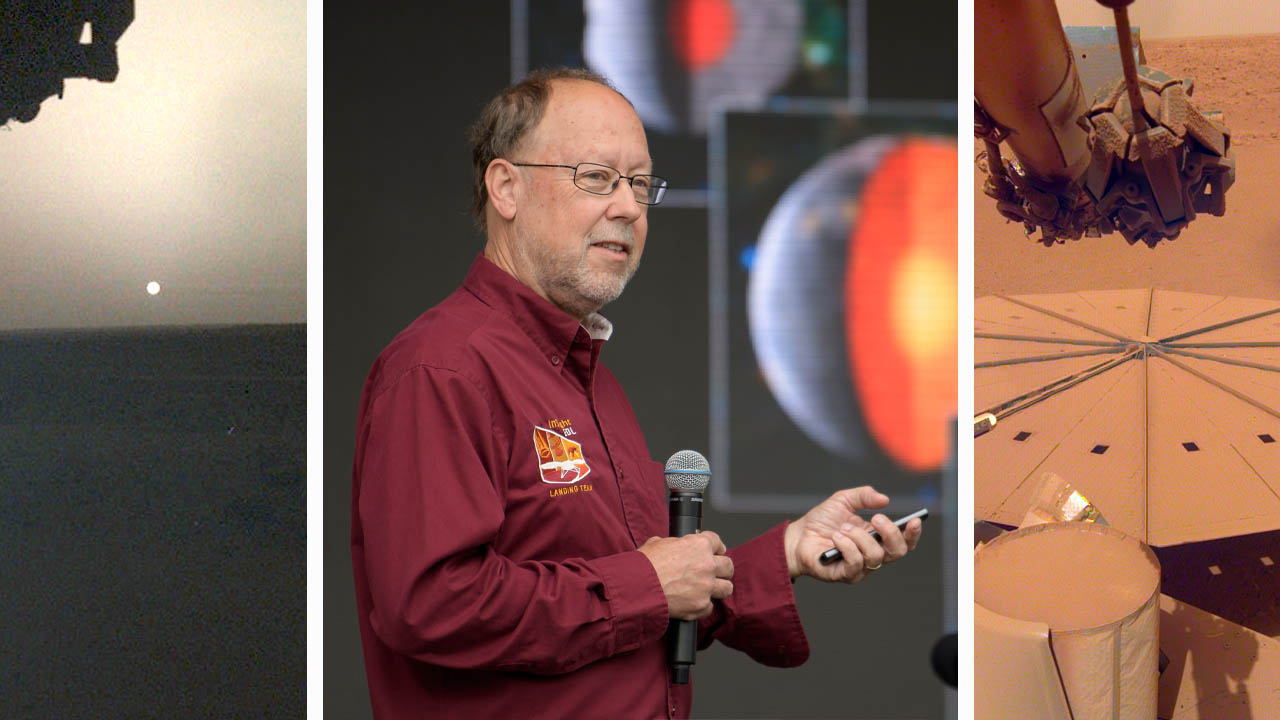 We met Bruce Banerdt, NASA InSight mission principal investigator. InSight lander, landed at Elysium Planitia on Mars on 26 November 2018, was manufactured by Lockheed Martin Space Systems, was managed by NASA’s Jet Propulsion Laboratory (JPL), and most of its scientific instruments were built by European agencies.

On 19 December 2022, NASA announced in a blog post that the InSight lander had lost communications with Earth, most likely marking the end of the InSight mission. The cause of the communication interruption is due to excessive dust settled on the solar panels, which prevent the battery from being recharged.  The interview was carried out on December 1, 2022, therefore before the interruption of communications.

Insight lander studied the interior of Mars through a seismograph, called Seismic Experiment for Interior Structure (SEIS), built by CNES (French Space Agency). Its onboard seismometer has measured over 1,300 seismic events on Mars.

I’ve read that InSight is generating an average of 300-to-310-watt hours of energy per Martian day. What can InSight do with this energy? How long can he survive on Mars?

With this much energy we are able to run our seismometer for about 8 hours every fourth day and send the data back to Earth. It is difficult to predict exactly how long it can survive, but we estimate that sometime in the next 2 months we will probably run out of energy to continue.

InSight has detected over 1,300 marsquakes, of which the strongest was a magnitude 5. For the first time, a new field was born: Martian seismology! What is the most important difference between earthquakes and marsquakes? Can we say that Mars is still a living planet?

Mars is indeed a living planet! These marsquakes are evidence of continuing geologic activity, although at a rate much lower than the Earth (perhaps 1/1000 as active).

I know that we need quakes above all to understand what the inside of a planet is like. For example, seismic waves propagate and bounce differently, depending on the material they encounter under the Martian surface, and this makes us understand what the core and mantle of Mars are like. What is the most important discovery made by InSight? What do marsquakes tell us about Mars’ core and mantle?

The most important discovery, in my view, is the ability to provide a “map”, for the first time, of the depths of Mars. We now know (within some uncertainty bounds) the thickness of the crust and the size and composition of the core. With additional analysis over the coming years of the seismic data set we will be able to tell even more about the “hidden Mars” below the surface.

By studying the nucleus of Mars, can we understand why the planet Mars no longer has a magnetic field? And can all these discoveries help us understand how our planet Earth works too?

Our measurements have told us that there are other elements dissolved in the core (in addition to the bulk iron and nickel). These elements change the melting temperature and the dynamic processes in the core, which in turn affect whether a magnetic field can be generated. It will take more analysis to extrapolate conditions back in time to understand when such a field was possible and when and why it ended, but we now have critical information to begin these studies.