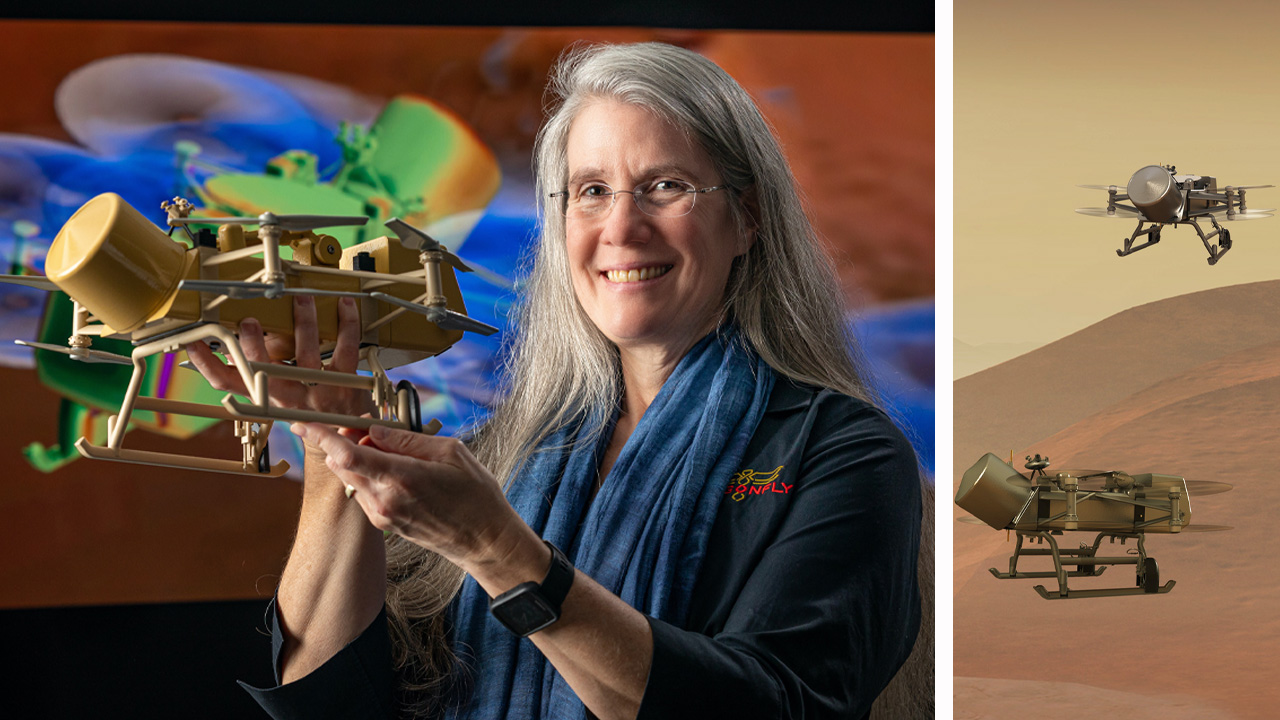 We met Elizabeth (Zibi) Turtle, astrophysics at the Johns Hopkins Applied Physics Laboratory (APL) in Laurel, Maryland, USA. Zibi is also a Principal Investigator on the NASA’s Dragonfly mission. The Dragonfly mission, starting in 2027, will send a rotorcraft lander (vertical-lift octocopter) to Titan, Saturn’s largest moon. Dragonfly, which will arrive in 2034, will the objective of studying prebiotic chemistry and the search for chemical signatures that could indicate water-based and/or hydrocarbon-based life.

Why is Titan exploration perfect for aircraft?

Saturn’s moon Titan has a dense atmosphere, with pressure 1.5 times that at Earth’s surface, as well as low gravity, only 1/7th that here on Earth. The combination makes it physically easier to fly on Titan than on Earth, for all kinds of heavier-than-air flight. Dragonfly is designed as a rotorcraft because that allows us flexibility in both flight and in landing so Dragonfly can make measurements on Titan’s surface.

As for Dragonfly’s flight, will it be similar to NASA’s Ingenuity Mars Helicopter located on Mars? For example, Dragonfly will fly autonomously, and take 30 images per second of Titan’s surface during the flight, to correct its position, speed and attitude estimates, just like Ingenuity does on Mars?

Unlike Mars, where there have been numerous orbiters that have provided very high-resolution images as well as topographic data, Titan’s surface has only been mapped at lower resolution by the Cassini spacecraft. Based on the Cassini data, we have regional maps of the area Dragonfly will explore, and we will use Dragonfly’s own aerial imagery to scout out potential future landing sites in advance.

(Dragonfly is also much bigger than Ingenuity – in fact the Dragonfly lander is similar in size to the Perseverance rover!).

Dragonfly will not use solar panels, but will have MMRTG (Multi-mission radioisotope thermoelectric generator) to produce energy, because the sunlight does not reach the surface of Titan. So, to imagine the features of Titan in our minds, and understand what Dragonfly might see, do we have to imagine a world with little light, many clouds and many lakes? What are the most important features of Titan?

The level of illumination by the Sun at Titan’s surface is about the same as the full Moon (or typical illumination in an interior lecture hall) here on Earth. So, while there isn’t enough sunlight to power Dragonfly using solar panels, our eyes would adjust to be able to see easily, and Dragonfly has several cameras that will show the surface both when Dragonfly is landed, as well as taking aerial images. There’s a picture of Titan’s surface taken by the Huygens Probe here on the Dragonfly website (click here).

Titan’s landscape has a lot of features that are similar to those on Earth. The equatorial region of Titan, where Dragonfly will explore, is covered by vast expanses of sand dunes. Titan’s dunes are similar to the kind of dunes found on Earth in the Namib Desert, except that on Titan the sand is organic in composition! There are also more rugged hills, as well as dry riverbeds like the washes in terrestrial deserts that flow when it rains – methane plays the role on Titan that water does here on Earth, with methane clouds, rain, rivers, lakes and seas. Titan’s lakes and seas are found near its north and south poles, primarily in the north.

Dragonfly will also be a scientific laboratory with many instruments, to analyze Titan. What are the most important mysteries that Dragonfly could uncover?

Dragonfly’s primary science goal is to understand prebiotic chemistry – chemical steps like those that occurred here on Earth before life developed – and habitability. Titan’s atmosphere produces very complex carbon-rich molecules, and these have had the opportunity to mix with liquid water in the distant past on Titan’s surface at sites of impact cratering and potentially in the present day in Titan’s deep interior liquid water ocean. So Titan has been doing prebiotic chemistry experiments for perhaps millions of years or even longer, and Dragonfly is designed to investigate the results of those experiments.

Dragonfly’s exploration region includes a large impact crater where organic material may have been exposed to liquid water, possibly for an extended period of time. By measuring the compositions of Titan’s surface materials, Dragonfly will show us what chemical processes have been at work on Titan and how far organic chemistry has progressed in this extraterrestrial environment which has all of the key ingredients necessary for life.

Dragonfly will also make measurements of Titan’s atmosphere, observations of its surface and local geology, as well as listening for Titan-quakes to learn how seismically active this ocean world is.