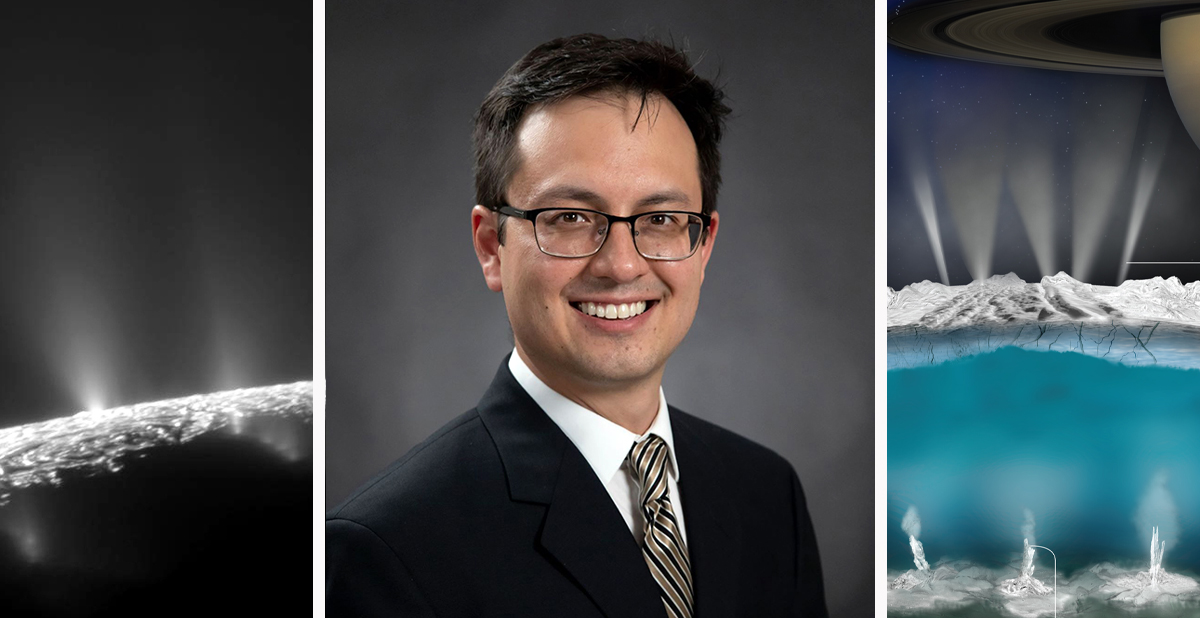 We met Christopher Glein, one of the leading experts in extraterrestrial oceanography and geochemistry of the Southwest Research Institute (SwRI) in San Antonio (Texas, USA). Glein and his team have uncovered new evidence for the existence of an essential ingredient for life in the subterranean ocean of Enceladus (a moon of Saturn). The research was published in the Proceedings of the National Academy of Sciences (PNAS) journal – to read it click HERE -. In 2017 Christopher Glein was awarded by ESA (European Space Agency), for outstanding contributions to ESA’s Rosetta mission. In our Solar System we have discovered two potentially habitable worlds, as far as microbial life is concerned: Enceladus, a moon of Saturn with an ocean of underground liquid water, still present today; and Europa, a moon of Jupiter with a layer of ice, which could hide pockets of liquid water.

You are a great American geochemist, and you have participated in many space missions. What are the most important and most exciting discoveries you have made?

The most exciting discovery that I’ve made so far is finding molecular hydrogen in the Enceladus plume. Two years earlier, I actually predicted that H2 could be present, because other aspects of the plume chemistry pointed to a type of water-rock interaction that is famous for making abundant H2. This is known as serpentinization. Now, one obvious reason why finding H2 was exciting is it’s an indicator of hydrothermal processes. Lots of people already know that. But, the more intriguing aspect is that we discovered that we could combine the H2 measurement with our previous measurements of CO2 and methane to calculate the amount of metabolic potential energy that is in Enceladus’s ocean. In other words, we found there is food in the ocean, and we could even estimate its “caloric content” – the amount of energy that an organism would obtain if it were to eat CO2 and H2, making methane as a byproduct. This type of organism is known as a methanogen.

You are studying the two moons of Saturn a lot: Titan and Enceladus. What fascinates you about these two moons?

I like geochemistry and Enceladus just so happens to be spewing out a lot of interesting molecules into space that tell us about the geochemistry of its subsurface ocean. Many other icy worlds probably also have oceans, but we can’t really access them using current technology. So, I think of Enceladus as a gateway to extraterrestrial oceanography. We can use Enceladus as a model system for understanding oceanography under much different conditions than we find in Earth’s oceans. This will help us to develop a more comprehensive understanding of oceans in a general sense, which we can hopefully then use to interpret observations of other exciting ocean worlds like Europa or some Super-Earth exoplanets.

Of course, I’m also very excited about the prospects of finding life on Enceladus!

Titan is awesome! There is just so much to study on Titan because it’s a very rich environment in terms of materials and processes. Let me tell you about two things that fascinate me. First, the origin of Titan’s atmosphere. Titan is unusual among moons in having a thick atmosphere, mostly made of nitrogen gas and methane. We don’t know exactly how Titan’s atmosphere formed. A number of interesting ideas have been proposed, involving, for example, a warmer surface environment and atmosphere in Titan’s early days or hydrothermal activity deep in the interior. We have some useful data from the Huygens probe that is helping us to make steady progress, but we are going to need more information from the Dragonfly mission to reach the next stage in our understanding of how Titan’s atmosphere came to be.

The second intriguing aspect of Titan to me goes back to my love of geochemistry. Titan has liquids and solids that interact at its surface, but these materials are totally weird. Unlike on Earth, where we have silicate and carbonate minerals predominately interacting with liquid water, on Titan, the liquid is composed of various mixtures of methane, ethane, and dissolved nitrogen at cryogenic temperatures. The “minerals” there are made of frozen organic compounds. Exactly, how this new kind of geochemistry works is still being studied, but there do seem to be some intriguing parallels between the types of geologic features that form on Titan and Earth. For example, soluble minerals can be dissolved to form sink holes, while insoluble minerals should persist in wet environments like the shores of Titan’s seas. Imagine walking along a benzene beach on Titan. It sounds like science fiction, but this is the nature of reality that Titan presents to us.

How did you understand that the ocean of Enceladus could be perfect for hosting life? And what are the characteristics of its ocean?

Enceladus’s ocean looks habitable to life as we know it. It appears to provide all of the requirements for life. The liquid water ocean is quite deep, about 40 km deep on average. The water is cold, but not supercooled. We think it’s just below the normal freezing temperature of water. The ocean is salty, but not excessively so. Cassini data suggest a salinity that is several times lower than Earth’s seawater. Enceladus’s ocean is like an estuary in this respect. Cassini data show that the ocean contains organic compounds, ammonia, and energy in the form of CO2-H2-CH4-H2O chemical disequilibrium. Not a bad place to live for a microbe! Recent modeling suggests that phosphorus in the forms of dissolved phosphates should be relatively abundant. This is surprising because low phosphorus availability often limits the growth of life on Earth, but for Enceladus, it seems that the phosphorus geochemistry would instead help to support life. The only missing ingredient might be sulfur. There were hints of H2S seen in the Cassini plume data, but we’re still working on this topic.

Are there any missions planned to study the ocean of Enceladus?

The US National Academies recently published a report recommending that NASA send a mission called Orbilander to Enceladus. This mission would orbit Enceladus, perform various science experiments in orbit while looking for a safe landing site, and then land on the surface. It’s main goal is to search for evidence of biosignatures. If there is life in Enceladus’s ocean, whole organisms, or some of their cellular constituents or metabolic byproducts could be erupted onto the surface. The beauty of Orbilander is that it will be able to analyze fresh snow on the surface that fell out of the plume. That snow originally started as ocean water in the interior. This is a very inspiring mission and it might get to Enceladus around 2050. Other missions that could arrive sooner are now being studied.

My personal opinion is that we don’t know how common life will be in the universe. It does seem that the universe is likely full of habitable worlds, both those that are bathed in starlight in the classical habitable zone, as well as icy moons whose habitability is supported by subsurface geothermal processes. The crux of the issue is the origin of life. We don’t currently know if the origin of life is statistically unlikely (or perhaps even a singular occurrence), or if geochemically rich and geophysically active planetary bodies inevitably generate life. This has been debated for a long time. Fortunately, there are at least several geochemically rich and geophysically active planetary bodies in our solar system that can be searched for life to gain new clues to this existential question. I think this will be a major motivator for many of our adventures in the solar system over the next century. The future looks bright.