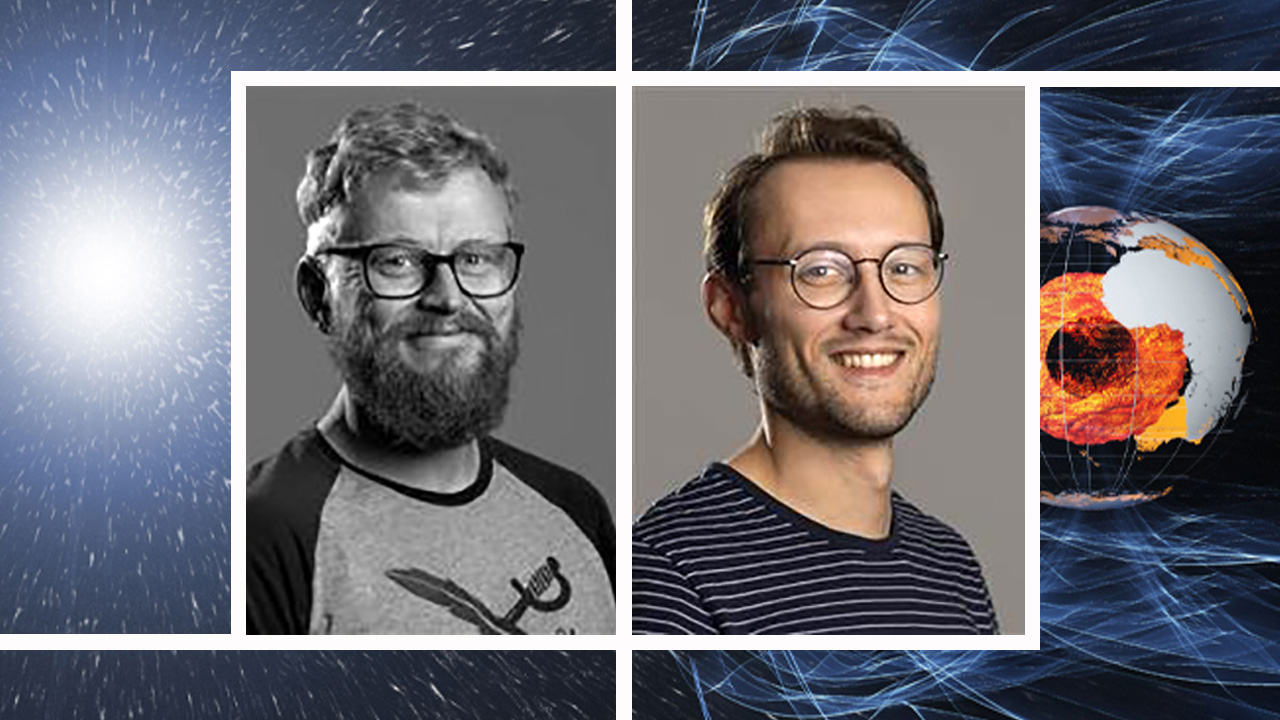 How did you manage to get the sound of the Earth’s magnetic field?

Klaus Nielsen: The sonification process we used is called Data Mapping, which means that the magnetic data is not transformed into sound, but instead used to control sound – rather like a musical score. The magnetic field itself does not make a sound. In stead we designed a soundtrack – an artist rendition of the magnetic field – that conveys to the listener a strong impression of a living planet in constant flux. We chose audio recordings of a variety of organic sounds (e.g. rocks tumbling, wood creaking and breaking) and then mapped the movements found in the data to different parameters of the audio playback (e.g. pitch, volume, speed).

Earth’s magnetic field is measured by both satellites and ground observatories. For our particular project we wanted to demonstrates the slow movements over a long time span, so we chose a model called GGF100k, a Global Geomagnetic model of the core field going back 100.000 years (those wishing to deepen the topic, in a strictly scientific way, can click HERE)

It was a great idea to have the sound of the Earth’s magnetic field heard in a square in Copenhagen (Denmark). Do you think that making many people listen to these sounds can remind us of the importance of the magnetic field, which is invisible to our eyes?

Klaus Nielsen: We certainly did want to create awareness about this particular aspect of our planet. It’s not that people are required to take action. The magnetic field is just there and doesn’t really care about what we humans to do the environment. But it’s a beautiful part of our life sustaining planet and as such deserves all the attention it can get. Knowledge is key.

How did you organize yourself to create this event, in the Copenhagen square? I read that each speaker represented a different position of the Earth …

Klaus Nielsen: Yes, this public square is very remarkable for its unique sound system called the Soundwells. It consists of 32 speakers permanently fixed into the ground and hooked up the 32-channel sound system, which means that the output of each can be controlled individually. Every week a different soundscape is played.

For our sonification we chose 32 points on the globe corresponding to the location of each speaker on the square and extracted 32 time series of data at a resolution of 1 data point per 100 year resulting in approximately 5 minutes of steady movements. In addition to the low frequency rumbling of the core field, data from a solar flare event from 3 November 2021 was given a similar treatment and added as an extra sonic layer in the higher frequency area.

What makes the Earth’s magnetic field work? How does it protect us from the sun’s radiation and eruptions?

Clemens Kloss: The Earth’s magnetic field is produced by a wide range of sources inside and outside the Earth. For example, the electrical currents in the upper part of the atmosphere and in the space near Earth, contribute to the Earth’s magnetic field. However, by far the strongest contribution of the observed field is generated within the Earth’s outer core, where a liquid metal is rapidly moving due to the cooling of the planet. The movement of the metallic core fluid maintains the magnetic field and causes it to slowly change in time. The precise mechanism of this process, called the Geodynamo, is an active topic of research.

The sun emits a stream of electrically charged particles, which varies in strength with the sun’s activity. As the solar particles approach the Earth, they start to interact with the magnetic field surrounding the Earth. As a consequence, the direction of the moving particles is changed such that they are mostly deflected around the Earth. However, in the polar regions the solar particles can reach the atmosphere, where they cause aurora, the well-known light emissions seen in the sky.

ESA has been studying our magnetic field for many years. Do you know if there have been any new discoveries? Something new that we didn’t know before?

Clemens Kloss: ESA’s Swarm mission, a constellation consisting of three satellites in low Earth orbit designed for measuring the Earth’s magnetic field to a high spatial and temporal resolution, has been key in studying the physical processes behind the Earth’s magnetic field over the past 10 years. The data collected by Swarm, together with those available from earlier satellite missions and ground-based magnetic observatories, have revealed a lot of detail about the field structure and its changes in time. For example, we find that the South Atlantic Anomaly, a feature of lower field intensity in South Atlantic region, is gradually growing and deepening, while it is slowly moving westward. In addition, satellite magnetic data have allowed us to track the slow movement of the magnetic pole in the northern polar region, which reflects the action of the Geodynamo in the Earth’s core.

You are also a musician. How was your passion for music and for the Universe born?

Klaus Nielsen: Always been there – for as long as I can remember. Space has always played an important role in electronic music cultures. But for this project we’re actually turning our gaze downwards towards the Earth’s core where there are plenty of fascinating mysteries to be found. Crossing the super technical approach and feel of electronic music with organic sounds and geophysical data is fascinating and the results have proved captivating for audiences. We will most certainly keep working with this to try and see if the results can be used further in musical contexts and to see if the installation can be exported to other countries.