Hendrik Kolvenbach and Giorgio Valsecchi, robotic engineers at ETH Zurich, talk about the design of the lunar robot dog 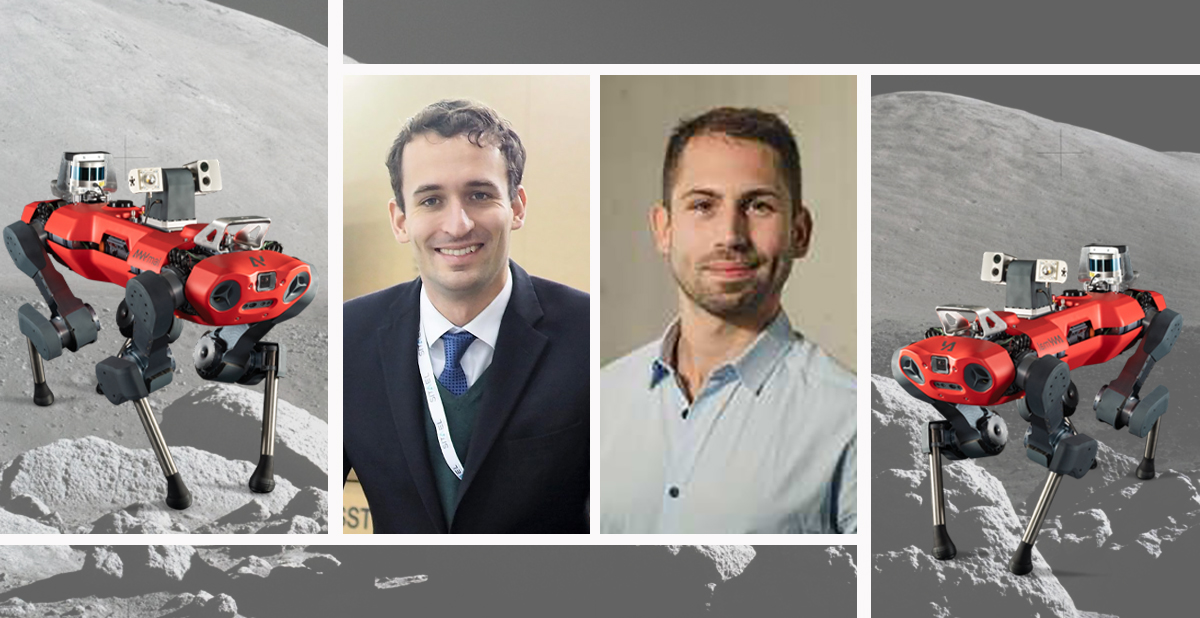 We met Hendrik Kolvenbach and Giorgio Valsecchi, robotic engineers from ETH Zurich‘s Robotic Systems Lab in Switzerland (the prestigious Zurich Polytechnic, where 22 Nobel Laureates studied, including Albert Einstein). Kolvenbach and Valsecchi, together with a team of researchers, are working on the prototype of a four-legged robot to be sent to the Moon, through an ESA (European Space Agency) lunar mission in the late 2020s and early years ’30. The goal of the “lunar robot dog“, called Leap (Legged Exploration of the Aristarchus Plateau), is to study the lunar areas inaccessible to wheeled rovers.

With the help of ETH Zürich, Max Planck Institute for Solar System Research, University of Münster and the Open University, you are building a four-legged robot called Leap (Legged Exploration of the Aristarchus Plateau). Leap will be brought to the Moon by ESA’s European Large Logistic Lander (EL3), between late 2020 and early 2030. What are the most important engineering difficulties you are experiencing, and which are you also solving?

To clarify: We have no confirmed space on the EL3 lander. We merely present our solution to ESA and hope that we are going to be selected for one of the future missions in the 2030s. 😉

Hendrik: Within LEAP, we are investigating a mission scenario for scientific exploration of the Moon featuring a legged robot. The legged robot would allow us to discover areas that are hard to reach with traditional wheeled robots, such as inclined slopes you would find on a crater. At the current state, we are developing legged robots to locomote on lunar-like terrains on earth and analyze which adaptions need to be made to send it to space.

Giorgio: We know quite a lot about how to build walking robots on Earth; people have been doing that for decades. But the Moon is very different. Our main challenges include modeling the environment, optimizing designs and controls for it, and validating them. The validation step is not straightforward: perfectly replicating the Moon environment is inefficient; we must recreate only the relevant conditions for the aspects we want to test.

Giorgio: We have understood that terrestrial designs are dominated by strength and impact tolerance, while thermal aspects and efficiency drive designs for the Moon. If we imagine deploying a terrestrial robot on the Moon, it would almost immediately overheat and run out of battery too quickly. On the Moon, the gravity is lower, temperatures are extreme, and the vacuum makes it hard to dissipate heat. Other challenges are coming from the aggressiveness of the environment: radiations are harmful to the electronics, and regolith is a very abrasive material that can easily penetrate any unsealed gap.

Will the four-legged robot Leap have difficulty walking on all fours on the Moon? As we know the lunar gravity is about 1/6 of the gravity of the Earth. How are you preparing the jump to face the very low gravity?

Hendrik: Legged robots are well suited for low-gravity environments. With legs, you can use gaits with extended flight phases, such as hopping or jumping on earth. With the lower gravity, those gaits become increasingly energy-efficient. We have also observed this with the Apollo astronauts, who naturally started to perform some hopping locomotion. In the lab, we develop these motions in simulation by training a neural network in low gravity and see what behavior emerges naturally, similarly to a small child learning to walk.

What are the places you can explore on the Moon? And why could it be better than a robot with wheels?

Within our work, we look exemplary at the Aristarchus plateau at the nearside equatorial region. This is a target of high scientific interest due to the relatively young crater and spectacular, collapsed lava tube nearby. The terrain is very geologically diverse; there are steep slopes, volcanic terraces and boulder fields formed from the ejecta. Usually, the geologists are most interested in this area because it is very information-dense. We see the legged robot as an extension to the wheeled systems able to explore this terrain. There we would hope to find material from the deeper layers of the moon and answering important questions about the formation and evolution of Moon.

READ ALSO –> Sanjay Vijendran, ESA engineer, talks about the project that collects solar energy from Space and transmits it to Earth

Hendrik: I think we will see robots and humans work together on Moon and Mars in the future. Coming from the Robotics field, I am convinced that advanced robotic systems will be able to generate a lot of scientific information and drastically increase our knowledge in the short term without risking human life. However, as humans, we seem to like exploring the worlds surrounding us. There is value in sharing this experience with humankind and inspiring the next generation of scientists and engineers. To build habitation and the necessary infrastructure to sustain a human presence in the long term, I am convinced that we will see additional robotic assets, such as automated excavators or other types of heavy-duty machinery, operating in space as well.