Fran Bagenal, NASA astrophysicist, talks about her missions in the Solar System 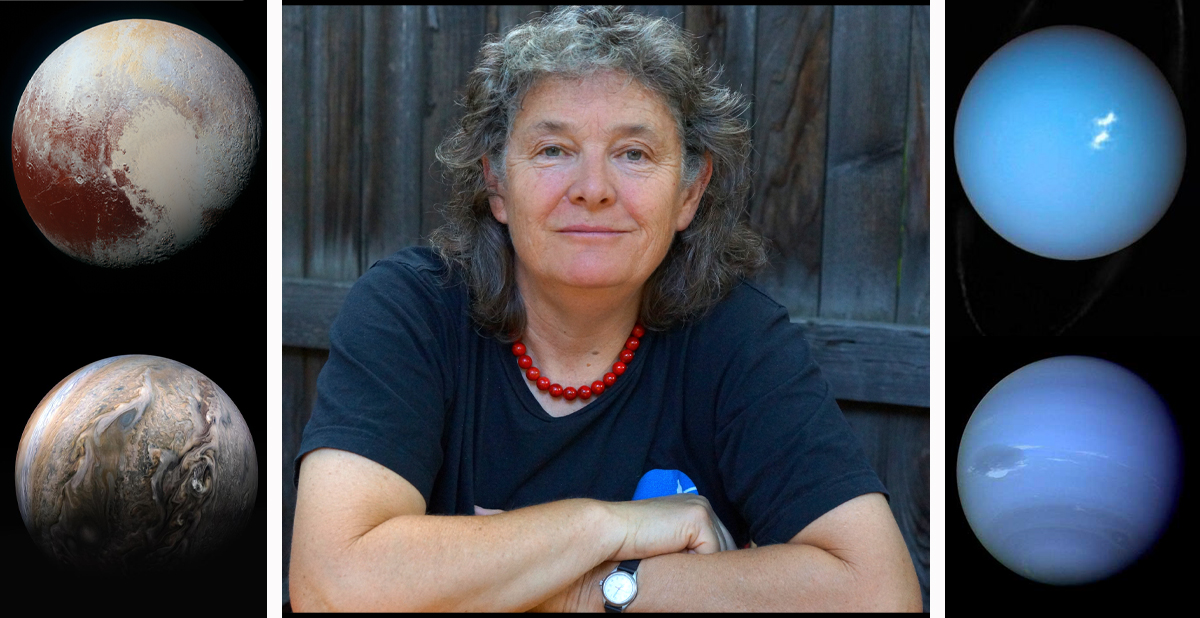 We met Fran Bagenal, professor of astrophysics and scientific researcher at the Laboratory for Atmospheric and Space Physics at the University of Colorado, United States. Bagenal was part of the scientific teams of numerous NASA space missions, such as the Voyager mission (today the two Voyager probes have exited the Solar System and, for the first time in Earth’s history, are flying first in interstellar space), then he also participated in the Galileo mission to Jupiter, the Deep Space 1 mission on comet Borrelly, the New Horizons mission, which was the first to fly over and photograph Pluto up close, and the Juno mission in Jupiter’s orbit.

How did your passion for the universe come about, especially for the planets?

I grew up in England watching BBC science documentaries. Scientists were exploring the oceans and mountains to find out how the Earth’s crust originally formed and now moves around. Then the US Apollo program put astronauts on the Moon. It was so cool to watch them wander around, kicking up dust, making measurements, collecting rocks. In my last year at school I was lucky to get to listen to Carl Sagan give a talk – in person – and actually shook his hand! He talked about the Mariner 9 mission to Mars. It was so impressive to see his honesty about what the mission discovered, and what it implied about the geology of Mars. But also he discussed what was not conclusive and what further measurements were needed. When I went to university I studied physics and geophysics, thinking I might pursue a career in the oil industry (what was I thinking!). On graduating I was undecided what to do next. I thought I would spend a year in the US studying a range of topics to find a problem to work on. I went to MIT and learned about geophysics of the Earth and planets. One day I was at a gathering of women scientists where a senior researcher told me to call in at MIT’s Center for Space Research where they were about to launch an instrument to Jupiter. It was the Voyager Plasma Science Instrument. Indeed, I was welcomed into the group and paid to complete a PhD doing the most exciting things – analyzing plasma and magnetic field data from flybys of Jupiter. Then, over the next decade, Saturn, Uranus and Neptune!

You are co-investigator of the New Horizons mission, which for the first time has seen the small planet Pluto up close. What emotions did you feel when you first saw Pluto? A planet that had never been seen up close, and at that time you were the first human beings to discover it.

After the Voyager flyby of Neptune (1989) we all wondered – what’s next? Is there life after Voyager?! I was starting as a junior professor at the University of Colorado. A young scientist came to me promoting a mission to Pluto. I thought “Pluto?! That’s just a piddly little planet with no magnetic field. Why would I want to go there?” Well, Alan Stern convinced me it might be worth pushing a Pluto mission to NASA. And 17 years later the New Horizons mission was finally launched. Then another 9 years of waiting while the spacecraft made it’s way to Pluto. But Pluto was well worth the wait. It was spectacular – I just jumped in the air with excitement!

What are the characteristics of Pluto that surprised you the most? Did you expect it like this?

To be honest, I was expecting a pretty boring lump of ice with a bunch of impact craters. I could not be more wrong – there were flowing glaciers of nitrogen ice, mountains of water ice, valleys, hills – lumpy bumpy surfaces where who knows what’s going on! And some impact craters. Perhaps the most dramatic image is this one taken as New Horizons was leaving Pluto. It shows the glaciers and mountains, as well as layers of haze in the atmosphere. Now that looks like a planet!

You have participated in many NASA missions and, through the Voyager, Galileo, Deep Space 1, New Horizons and Juno probes, you have been able to travel in our solar system. What are the most important discoveries you have made with the tools of these missions?

Another Voyager discovery is that Jupiter’s moon Io is covered in volcanoes. The rocky interior is heated by tidal forces of neighboring moons and Jupiter that tug and squeeze the crust. Lava flows out across the surface and gasses spew from volcanic vents. The smelly atmosphere (comprising sulfur dioxide gas) escapes the moon, becomes broken up and ionized. The charged ions of oxygen and sulfur – with equal numbers of electrons – become trapped in the magnetic field of Jupiter and rotate about the planet with the 10-hour spin period. These electrically charged gases form a donut of plasma that radiates ultraviolet light and slowly spreads out to fill the vast region around Jupiter that is controlled by the planet’s magnetic field – the magnetosphere. The Galileo spacecraft spent 34 orbits exploring this region – discovering the moon Ganymede has it’s own magnetic field and that Europa has a thick ocean of water under an icy crust. Juno has been orbiting Jupiter since 2016, flying over its poles and exploring the gas giant planet’s interior. Next year we expect some flybys of Io – what will Juno find this time?!

What did these space missions teach you in your life? And what advice would you give to future scientists who dream of studying the Universe?

From many years of working with scientists, I think I learned that it pays off to be a friendly, jolly person. You may be the most brilliant physicist, but if you are obnoxious, people do not want to collaborate with you.

I love visiting schools to talk about the latest exploration of space, to urge school kids to explore and ask questions. And, most importantly, persist with their mathematics and science homework. Maybe you’ll end up building a better fridge. Or maybe you’ll build a robot to explore Mars. Then, as you move through your career, persistence is key. In particular, take time each day for some deep thinking – when you put away electronic devices and get buried into deciphering data, coding models, reading research papers or writing about your discoveries.