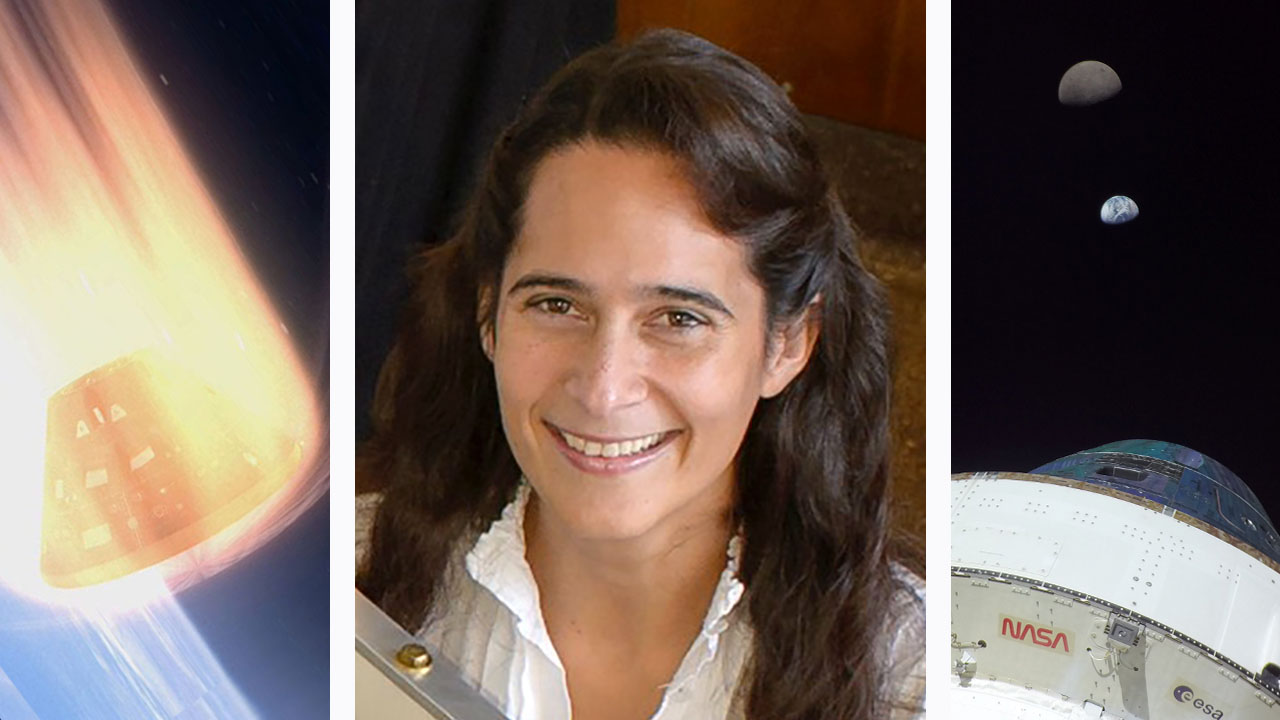 We met Sarah D’Souza, NASA Ames engineer and Deputy Systems Manager for the Orion Thermal Protection System (TPS), at NASA’s Ames Research Center in Mountain View, California (USA). NASA’s Orion spacecraft of Artemis program, that made its first flight without crew on the 16th November, 2022 by Artemis 1 mission, has the objective to bring the next man and the first woman on the Moon within 2025 by Artemis 3 mission (in 2024, there will be the first flight with crew to lunar orbit by Artemis 2 mission). The Orion Spacecraft, that can carry 2-6 astronauts, is installed on the top of the new Mega Moon Rocket “NASA’s Space Launch System (SLS)“, the biggest rocket of the world and the most powerful of the history.

After the launch happened on the 16th November 2022 and after numerous tests in the lunar orbit, Orion returned to Earth on the 11th December, 2022 at the speed of about 40.000 km/h (about 11 kilometers per second). One of the most dangerous moments of the return to Earth is the entry into the earth’s atmosphere at very high speeds. As it slams through Earth’s atmosphere, air friction cuts that speed to just 500 km/h (300 miles per hour) in a matter of minutes. To protect the spacecraft and his crew from the high temperature (2800° Celsius/5,000 degrees Fahrenheit), Orion has a special heat shield. Sarah D’Souza – NASA Ames engineer – told us some characteristics of Orion’s thermal protection.

One curiosity: during his re-entry into Earth’s Atmosphere, Orion made his new maneuver, called skip entry (the first skip entry for a human spacecraft). The spacecraft has literally skipped on the Earth’s atmosphere before making the entry (it’s a little like skipping a rock across the water in a river or lake).

To know all the detailed characteristics of Orion spacecraft, click HERE.

Regarding the new re-entry technique tested by the Orion spacecraft, why is this technique so important?

The Orion skip re-entry technique is important because it extends the potential range of the re-entry, giving Orion a precise landing either at the primary landing site or a wide range of possible weather alternates. Additionally, this type of entry splits the acceleration load and heat pulse into two events, which the Orion heat shield designed to withstand.

If Orion didn’t perform this technique, would the heat shield not work?

The heat shield would still work because a non-skip entry (direct entry) has a shorter range, which is within the envelope of the heat shield performance.

Did the Apollo missions use another technique?

What are the most important differences between the Orion spacecraft heat shield and the Apollo Command Module heat shield? Did you use the same materials?

One of the most important difference between the two heat shields is in how the heat shields were built. The Apollo heat shield was a honeycomb structure that was then manually filled by technicians with a thermal protection material called Avcoat. Orion, on the other hand, consists of multiple molded, solid blocks of Avcoat that are installed on the main structure. This is similar to the way you may lay down floor tile in your kitchen, but with much thicker and hardier materials.

The Orion spacecraft is bigger than the Apollo Command Module, so returning to Earth is different than 50 years ago. What were the most important difficulties you encountered while designing the heat shield?

The most difficult aspect was the design and development of the manufacturing and building techniques for the heat shield. We had to develop methods that ensured there are no anomalies in the molded blocks of Avcoat so that thermal performance was not degraded and ensure that all of the Avcoat blocks are properly adhered to the structures so that they do not fall off under the intense load and heat of entry. These are just some of the primary challenges that our engineers addressed for Orion.

Why is the Orion spacecraft heat shield safer than the dangerous Space Shuttle heat shield? What are the most important differences between the two?

It is important to note that both the Orion and Space Shuttle heat shields have been put through very rigorous and extensive testing to verify that these systems protect the astronauts aboard from the extreme heat of re-entry. One of the primary differences between these two vehicles is that the Space Shuttle heat shield was an insulator type thermal protection system that was re-usable. Whereas, the Orion heat shield is an ablator that is only used for one flight. Ablative heat shields consist of material that is design to burn off as it re-enters the atmosphere, transferring heat away from the spacecraft and an insulating heat shield consists of material that inhibits heat transfer from the environment, through the thermal protection system and into the internal structure.

It is common for flight programs across NASA to share information on lessons learned about their systems. However, there are some key differences in the mission requirements for a robotic Mars entry and a human rated Earth re-entry that make each of the heat shield systems designs unique.

Elizabeth Tammi, Hubble mission’s social media lead, talks about her work at NASA: “So I combined writing to science”