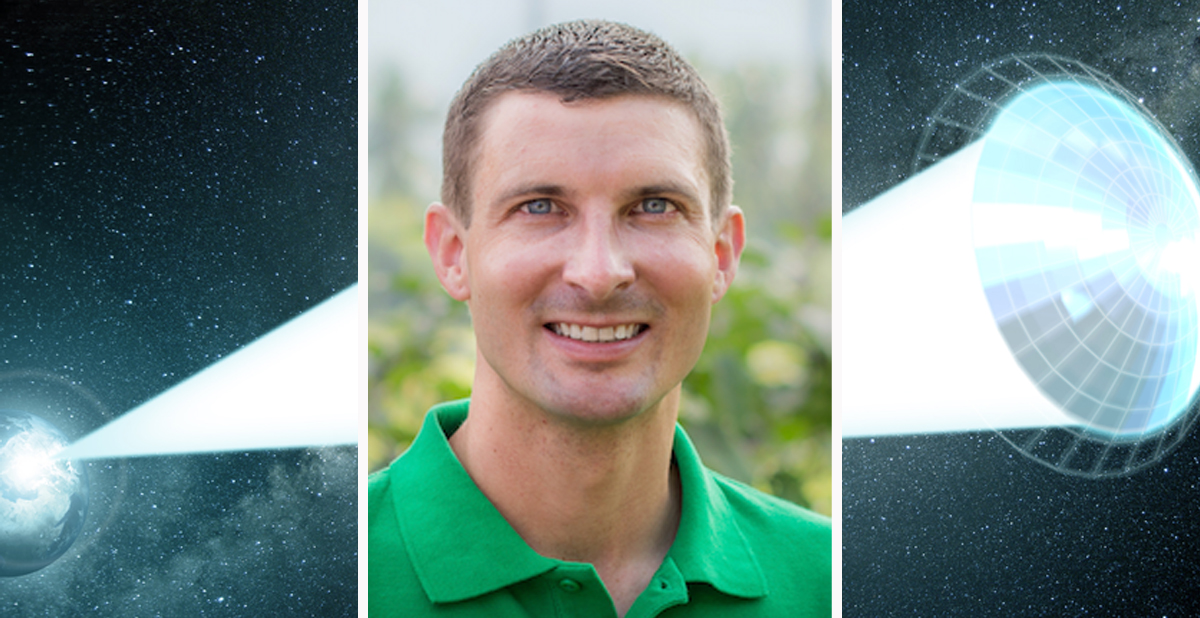 We met Matthew Campbell, mechanical engineer, postdoctoral researcher of the Department of Mechanical Engineering and Applied Mechanics of the “Bargatin Group” of the University of Pennsylvania (USA).

The goal of the “Bargatin Group” is to create a sail that does not tear and does not melt during interstellar travel. There are currently two different sails: the solar sail, powered by the sun; and the sail powered by laser photons. A solar sail probe is propelled by the solar rays charged with photons, which “bumping” against the sail fabric, push it forward (just like sailing boats, which are pushed by the wind). Instead, the chips/sails pushed by powerful laser beams must have a different fabric, just to withstand the enormous laser power.

The laser beams are able to provide the small chip/sail with a frightening boost, capable of significantly reducing interstellar travel. The big dream is to send a chip/sail, the size of a microchip, pushed by powerful laser beams, up to Alpha Centauri (the Star closest to us, only 4 light years away from Earth). With traditional technology it would take 80,000 years of travel to reach it, but with sailing powered by laser photons, the journey would be reduced to just 20 years.

To create a technology of the future you are looking to the past, taking up the famous sail. This time, instead of being blown by the wind, she will be blown by the light. Will the light come from a series of lasers mounted on the surface of the Earth?

Yes – the idea is to have a very large array of lasers on Earth. The lasers might be arranged in a square pattern, and the side length of the square would be several kilometers, so think of it like thousands of individual lasers linked together. The power required would be around 100 gigawatts, which is about five times the output of the Three Gorges Dam in China. Fortunately, these lasers would not need to be turned on for very long – only 10-30 minutes per chip/sail launch, and it may be that only some of the lasers would need to be turned on at a given time. These lasers would probably be powered by large banks of capacitors or batteries that were charged slowly via solar panels over the course of days or weeks.

When the spacecraft has moved million or billion of kilometers away from us, will it continue to be pushed by the lasers mounted on Earth?

The lasers are used only to accelerate the chips/sails to high velocities; once a chip/sail reaches its target velocity (around one fifth the speed of light), it no longer needs any light to accelerate it more. The term “acceleration length” is used to denote the distance that a chip/sail travels before it reaches that target velocity. Typical acceleration lengths are on the order of 10 million kilometers.  So, the answer is no – once the chip is around 10 million kilometers from Earth, the laser light is no longer needed.  Actually, a fun fact is that the lasers can be turned off before the chip/sail reach their target velocity, because it the final photons released from the laser take several minutes to reach the moving sail and propel it to its final speed.

What is the difference between your sail, propelled with lasers, and the sail of space agencies, propelled by the sun’s rays? Does the sail fabric have to be different?

There are several noteworthy differences between solar sails (powered by the sun) and light sails (powered by laser photons). Solar sails generally have very large areas (100 square meters) in order to capture more of the sun’s photons, whereas light sails must have small areas (less than 10 square meters) in order to be lightweight and accelerate quickly. Solar sails have higher areal densities (about 10 grams per square meter) compared to light sails (about 0.1 gram per square meter).  Solar sails are generally designed to travel at low velocities (less than 0.1% the speed of light), whereas light sails aim to travel very fast (20% or more of the speed of light). Many of the existing solar sail designs are planar (flat) and are supported by a frame, whereas the design we propose is curved much like a traditional gas-inflated parachute. Also, solar sails are designed to reflect the entire solar spectrum (many photon wavelengths), whereas light sails are designed for a much narrower range of photons (only the photon wavelengths from the laser – of course compensated for the fact that the incoming photon wavelengths are longer the faster the sail is moving). These differences, as well as others that I have not mentioned here, motivate substantial differences in the sail fabric for solar sails and light sails. To name a few, relative to solar sail films, light sail films must be more reflective, absorb less light (at the laser wavelength), emit more light (at all wavelengths except those near the laser), tolerate greater stress/strain, be more lightweight, etc.

This technology will allow a spacecraft to reach the closest star to us, Alpha Centauri, which is 4 light years away, in just 20 years of travel, instead of 80,000 years with traditional technology. Could your laser powered glider also be used for travel in our Solar System, to shorten the duration of the voyage?

Solar sails could certainly be used for travel within our solar system. Mission specialists would need to consider whether it would be worthwhile to send gram-sized probes to other planets in minutes or better to wait several years to have full-scale satellites sent using traditional rockets.

Do you think that one day, it will be possible to build a spaceship with a sail propelled with lasers, to bring humans close to the star Alpha Centauri? In that case, human beings will have to suffer the effects of Albert Einstein’s Relativity.

Others have proposed using laser-propelled light sails for this purpose. Several significant challenges exist for this effort, however, including the enormous laser power required (millions of gigawatts) and the long travel times (40-50 years for a return trip). Even if it were technically possible, it is unclear whether humankind would choose to invest in such a venture. Improvements in microchip and sensor technology promise to greatly improve the capabilities of space probes, perhaps undermining the purpose of human visits to other star systems.

Your creation could give us, within a few decades, the first photo taken of a planet belonging to another Solar System! The first close-up photo of an exoplanet, or of another star! What is the advice you would give to the young people of 2050, when they will be thrilled to see the first spacecraft reach another star, for the first time?

Interestingly, it may be that, if we are able to construct 50-meters-diameter reflectors for space telescopes, we could image foreign planets from Earth without needing to send probes closer. I am a person of faith, believing in a loving God who created our planet and fills it with life. As I imagine exploring further away from Earth and discovering other parts of the cosmos, I sense more and more that our planet is uniquely and specially designed for us to live. Considering that, I would encourage everyone to be thankful for planet Earth, to try to preserve it as best they can, and perhaps even to search out answers for big questions about who created them and what their purpose is in life.