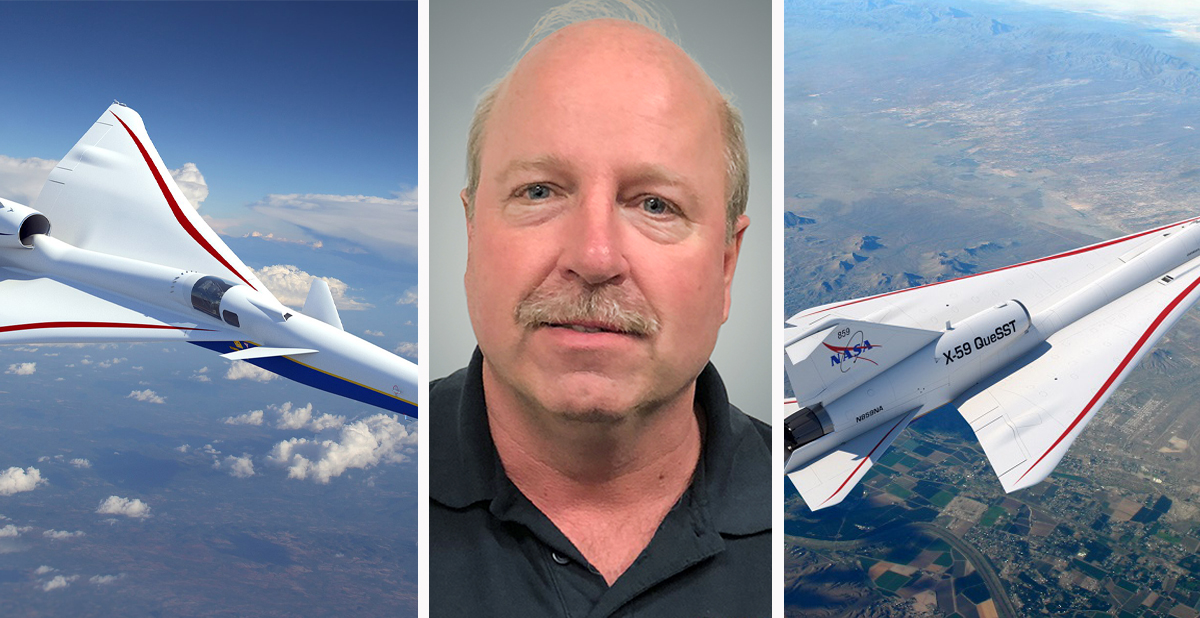 We met with Dr David Richwine, NASA mechanical engineer, Deputy Project Manager for Technology in the “Low-Boom Flight Demonstrator (LBFD)” project, who will demonstrate that it is possible to reduce the “sonic boom” (the roar that occurs when an airplane exceeds the speed of sound).
The “LBFD” is responsible for the management and construction of NASA’s experimental supersonic aircraft “X-59 Quiet Supersonic Technology (QueSST)” built by Lockheed Martin.
Dr David Richwine worked for 35 years at NASA’s Langley Research Center and NASA’s Armstrong Flight Research Center.

Since 2003, supersonic planes have been suspended all over the world, mainly due to the high engine noise levels, which created problems for the inhabitants due to the sonic booms. How did you solve this problem? Especially for the take-off phase.

Take-off (airport) noise is an important challenge for all aircraft to maintain acceptable jet noise levels in communities around airports. This is even more challenging for supersonic aircraft and is also part of NASA’s long-term research portfolio for sustainable aircraft operations. Take off noise is different than sonic boom noise. Sonic booms known to disrupt people on the ground are generated when an aircraft is flying faster than the speed of sound. All supersonic aircraft designs to date, including all military aircraft and the long-retired Concorde, create a series of shock waves in the air when they fly faster than sound. These shock waves are generated by parts of the aircraft, including the nose, canopy, wing, tail, and engine inlets. Once created, the shock waves travel outward in all directions from the aircraft and then merge together because they are of different strengths, and therefore are moving at slightly different speeds. This results in two, distinct shock waves that we hear on the ground as the “boom-boom” of a sonic boom. NASA and its industry partners have matured design tools and technologies that make it possible to design an aircraft with a different shape that alters how supersonic shock waves behave. Instead of coming together to be heard on the ground as a loud “boom-boom” the shock waves do not merge and rapidly weaken. The result is the sound heard on the ground is more like a soft “thump“.

Another big problem was aerodynamics. What is the difference between the previous supersonic aircraft, and the X-59 of NASA and Lockheed Martin, in terms of aerodynamics?

I touched on the topic of aerodynamics in the prior question but can go into a little more detail. Most supersonic aircraft tend to have slightly longer noses and highly swept wings to optimize the drag performance of the aircraft. While this has been considered in the X-59 design, the primary goal of our team was to optimize the X-59 aircraft to reduce the sonic boom to a quieter sonic thump. As a result, several unique features of the X-59 include a longer-than-typical nose, lower profile canopy, and a top-mounted engine inlet. All of these features help facilitate a sonic-thump design that is optimized for flying over communities.

NASA’s new X-59 aircraft could lead the world into a new era of commercial travel. For example, Los Angeles – New York will be covered in 2.5 hours instead of 5 hours. Will these flights take place only in the United Stated, or will the ban on flying supersonic aircraft be lifted around the world as well?

Some background – NASA has led research in the area of sonic boom noise annoyance for many years and firmly believes that appropriate, fully representative data necessary for establishing any new rules regarding supersonic flight over land does not exist. There has not been a large-scale community response study in decades that involves supersonic overflight of residents in their homes. Available data from older studies does not reflect significant changes in public perception of noise annoyance since such tests were conducted. The International Civil Aviation Organization (ICAO), Committee on Aviation Environmental Protection (CAEP), Federal Aviation Administration (FAA), and NASA agree that new community response data, using representative boom loudness levels in realistic environments, is required to create limits for future supersonic overland flight standards. NASA fully intends on providing the data from this effort to ICAO/CAEP in order to enable future supersonic overland flight standards that would benefit ALL intern-continental and longer travel routes.

I mostly addressed this question in the first response but will go into more detail. As you indicate, a supersonic aircraft is moving faster that the speed of sound around the aircraft resulting in shock wave that produces a sonic boom to observers on the ground. The X-59 is designed in such a way that smaller shock waves of similar strength are generated such that these waves travel at similar speed and do not combine into larger shock waves that produce the large sonic boom heard by people on the ground.

The X-59 has finished structural loads testing and will continue various system checkouts and testing for the next several months. First flight of the X-59 is currently planned for late 2022 followed by flights to prove the performance and safety of the aircraft. NASA then plans to perform a series of acoustic validation flights followed by the initial community response flight tests over U.S. communities in 2024. During the community flight tests, NASA will fly the X-59 over several communities to gauge what noise level is acceptable to communities on the ground.

Since the X-59 plane must necessarily have a long and skinny nose for aerodynamics, how will the pilots manage the plane correctly?

As I previously mentioned, one of the unique features of the X-59 includes a longer-than-typical nose and lower profile canopy that provide forward visibility challenges for the pilot. As you probably remember, the Concorde required a drooped nose to provide sufficient see-to-land visibility during landing. NASA will use its eXternal Vision System (XVS) technology to ensure the aircraft can navigate safely through the National Air Space. XVS allows pilots to safely fly to a landing site, warn them of other aircraft near their flight path, and provides additional visual aids for airport approaches, landings and takeoffs. XVS uses a combination of sensor, computing, and display technologies to provide an equivalent level of safety and performance as provided by the forward-facing windows in standard aircraft. You can see an example of the XVS HERE.

The supersonic will increase the speed of our life, shortening the travel time. A long time ago, a short stretch was covered in weeks of travel. What could be the next step for the human species? What will it be like to travel in 50 years, or in 100 years?

Given the rapid development of technologies, I suspect that future travel in the next 100 years will be much different than today – both physical and virtual travel or hybrid environments that combine both. In the nearer-term, supersonic and possibly hypersonic commercial travel will be available to the average person. I suspect that “virtual” travel will become commonplace and the biggest changes will occur in physical mobility with the public travelling from point-to-point in the air and ground, or combinations of the two. NASA’s Aeronautics maintains a Strategic Implementation Plan that addresses many of the envisioned scenarios and periodically updates this plan to reflect emerging trends and technologies.

Interview made by Fabio Meneghella